Twenty new fires sparked overnight, with four of those suspected to be caused by people, according to a daily update on Thursday from the BC Wildfire Service.

Since the season started April 1, more than 1,500 fires have started, burning 101,000 hectares of land – larger than the Greater Toronto area. The total cost has reached about $170 million. That’s compared to $564 million spent on last year’s record-breaking season.

Twenty-seven fires remain priorities for crews: eight in the Kamloops and Okanagan areas, four in southeastern B.C., nine in the northwest, three in the Cariboo and one in the coastal fire centre.

Out-of-province firefighters have arrived to help from across Canada, New Zealand, Mexico and Australia.

Although forecasters anticipate Friday will bring cooler temperatures, almost all of the province is at a fire danger rating of high to extreme.

Snowy Mountain continues to burn largest in the Kamloops Fire Centre at 12,039 hectares. With the weather in crews’ favour, it’s now 40-per-cent contained.

As of Thursday, 106 firefighters and seven pieces of heavy equipment were dedicated to that fire, burning south of Keremeos. More than 860 properties remain on an evacuation alert.

Placer Mountain is also nearly 90-per-cent contained, burning at an estimated 2,375 hectares west of Cathedral Park near Princeton. The fire is in the mop-up stage as the fire smoulders.

The Proctor Road fire northeast of Lumby and Monte Lake is classified as “held,” meaning the BC Wildfire Service does not believe it will grow outside of its current perimeter.

Both fires remain 100 per cent guarded.

An incident management team is moving into control of the Mabel Creek, Sugar Mountain and Proctor Road wildfires burning in the North Okanagan.

There has not been significant lightning in southeastern B.C. over the past few days, but holdover fires continue to be a problem.

“These flare-ups can occur after prolonged hot and dry conditions, paired with wind activity. These types of fires tend to burn aggressively once they flare up,” the BC Wildfire Service said in its update.

Ahead of the Shambhala Music Festival this weekend, fire crews do not anticipate that the wildfires near Nelson will lead to evacuation alerts similar to last year.

The 35-hectare MacArthur Creek fire is about 10 kilometres east of Salmo River Ranch, where the music festival is set to run Friday through Monday.

The Kootenay wildfire, 1,420 hectares in size is being fought by 120 personnel and 11 helicopters. Highway 93 was partially closed. Parks Canada issued an area closure for Luxor Pass trail, West Kootenay trail and Dolly Varden trail as a precaution.

North of Radium Hot Springs, the 283-hectare Whitetail Creek fire is 40-per-cent contained but still classified as out of control.

Nine properties ave been placed on an evacuation alert because of the Cross River fire, northeast of Radium.

With nine major wildfires burning in the region, the Telegraph Creek fire is still the most devastating. Twenty-seven structures have been lost to the blaze.

After two wildfires merged in the area Wednesday, a total of 28,000 hectares have burned. 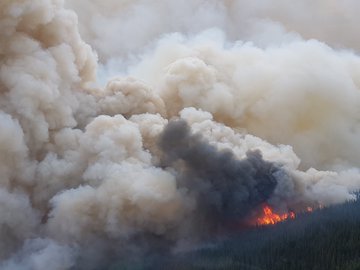 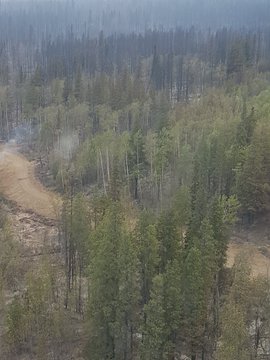 (1/2) The Alkali Lake #BCwildfire (~9,000 ha) and South Stikine River fire (~19,000 ha) near Telegraph Creek are still showing significant fire activity. The fires are expected to merge into one if they have not already. 95 personnel, 10 helis, heavy equip. and airtankers on site

Emergency Support Services units have been set up in Dease Lake, Terrace and Smithers.

Other fires in the region include the vigorous surface fire in Verdun Mountain, and the Elbow Lake fire 70 kilometres north of Dease Lake. That fire is classified as out of control.

The Shovel Lake fire, near Burns Lake, is 12,000 hectares. More than 100 firefighters supported by 51 pieces of heavy equipment have been deployed.

The Island Lake fire, burning in Francois Lake Provincial Park is 7,500 hectares and 10-per-cent contained. Properties continue to be assessed for structural protection units, and sprinklers have been set up on some structures, including those on the south side of Francois Lake.

In Fort Babine, about 100 kilometres north of Smithers, crews have been struggling with wind gusts that have led to an increase in fire activity near Torkelson Lake. Those flames remain out of control.

Crews have been struggling with harsh winds in the Cariboo region as they battle three major wildfires.

The Wild Goose Lake fire escaped the fire guards Wednesday night and has since grown to 850 hectares in size, as crews work to establish new containment lines.

West of Shag Creek, the winds stirred up the 900-hectare fire so much that crews had to be pulled until it calms. Nearly 100 properties have been placed under an evacuation order. Residents have been sent to Prince George. 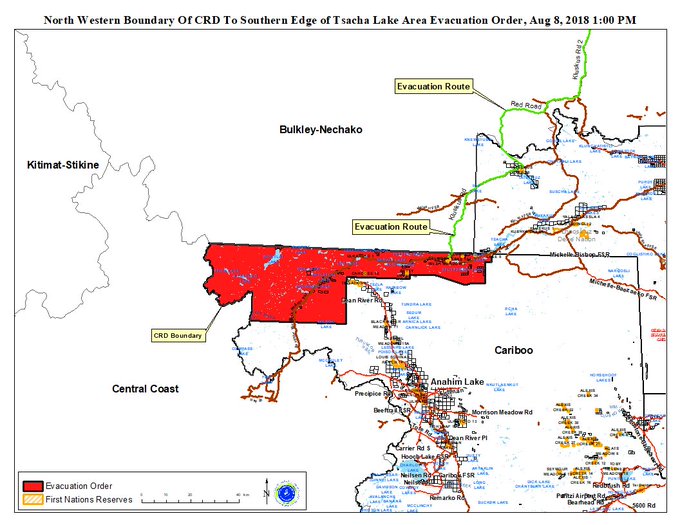 Evacuation order issued for 93 properties between the north western boundary of the CRD to the southern edge of Tsacha Lake. This includes the 17 properties in the Aug. 7 Shag Creek evacuation alert. Evacuation route and ESS details: https://bit.ly/2AQt6Oc

West of Haggens Point, the Horsefly Lake fire is 90-per-cent contained, as 29 firefighters monitor it. Evacuation orders have been rescinded in the area.

The Nanaimo Lakes fire caused the first death this season. A man delivering resources to fire crews Wednesday night died in his truck.

This fire is 179 hectares in size and 25-per-cent contained. The cause is still under investigation.

Fifty-five firefighters, three helicopters and 18 pieces of heavy equipment are working to combat it.

A 50-hectare fire near Hope has closed Skagit Valley Provincial Park. In Agassiz, a fire near Highway 7 remains at 25 hectares.

The Chutanli Lake fire, northeast of Tatelkuz Lake, is 2,862 hectares. Crews retreated from the line on Aug. 7 because of dangerous fire behaviour until further assessment. An evacuation alert is in effect for nearby homes.

Roughly 20 kilometres east of Takla Lake, a 1,600-hectare fire is burning at Purvis Lake. An evacuation order has been been issued for homes from Purvis Lake to Tchentlo Lake.